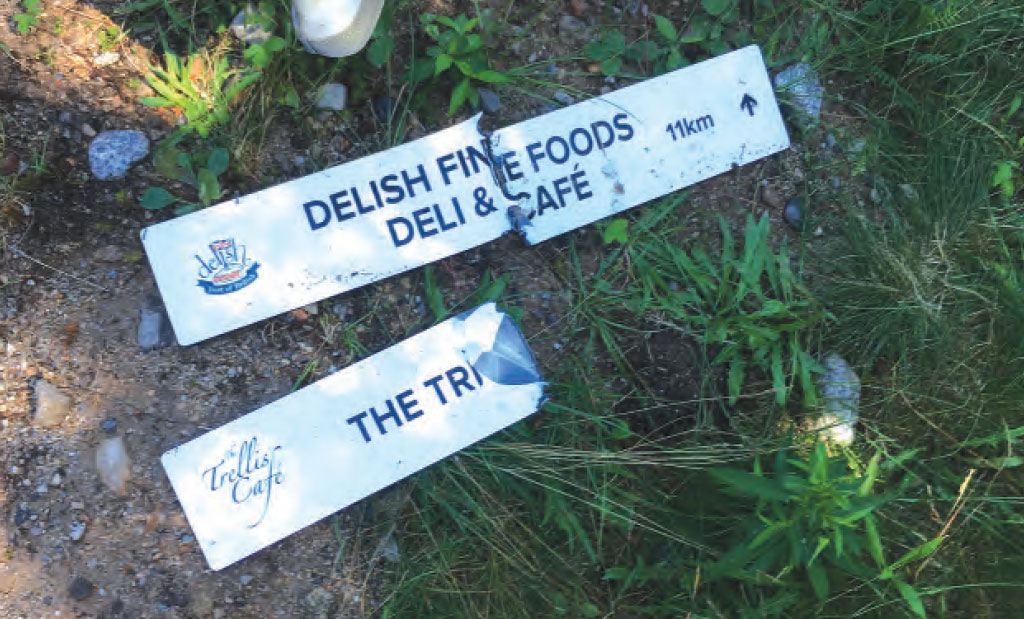 Vandalism and Dorian: Our Trail is Suffering!

In August, St. Margaret’s Bay Trail users were treated to a few weeks of perfection—the trail was smooth as silk as the many ravages of the winter storms had been repaired and the trail edges nicely cleared.Then came Labor Day weekend and the intense vandalism centered in Ingramport and Boutilier’s Point.

Armed with spray paint, vandals covered available rock surfaces with white or black patterns. The cliff face near the Ingramport exchange received a large, black pattern, apparently linked to a rap musician.The same black pattern was added to a memorial bench in Boutilier’s Point. Adding injury to insult, the vandals pushed a recently installed memorial bench off the trail in Queensland, and destroyed information signs and an interpretive sign at the Salt Marsh and Bay Look-off Park area of Boutiliers Point.

Around the same time and place, a car was hit with a fist-sized rock thrown through the woods by someone on the Trail. It will cost $1,000 to fix the car and could have caused a serious accident. Additional acts associated with this vandalism included camping at the Bay Lookoff Park and intense ATV and dirt bake activity in the middle of the night.

Washouts are the big problem on the trail surface at this point. The section from Lewis Lake to Black Point only had a few washouts, centered around km 31 and Station Road, but the section west of Black Point was really hit hard, with much of the recently added surface eroded away. How sad that all the fine work done during the last years has suffered so much from natural and unnatural causes.

Clearly, we can’t control hurricanes, but hopefully we can avoid vandalism of this important community attraction. Please do your part to combat this degradation. If you know or encounter any vandals, try to dissuade them from their destructive ways.

The Safety Minded ATV Association has recently started a Trail Patrol with a goal of education and reporting inappropriate activity on the Trail. It is frustrating that so many of the ATV and dirt bike users are unlicensed. They fly by on the trail, leaving pedestrians or cyclists in a cloud of dust, unable to say, “Hey, dirt bikes aren’t allowed!” or “Hey, you are going too fast! .”

A case in point is the recent hit and run just west of Hubbards between an ATV and a cyclist training for the Ride for Cancer, resulting in a concussion. That was during the daytime, but much irresponsible activity happens at night (trail use is prohibited between 11:00 p.m. and 5:00 a.m.) and it is even harder to stop.

We as a community must work together to keep our trail the wonderful resource it is. Please help!